From the opening of SHE GETS NAKED IN THE END

You know from /looking at her –

From looking at her/ she’s trouble.

SHE
She’s the end of the world.

She’d have it no other way.

You see her, wearing that, / holy shit

SHE
She glides into the bar. Doesn’t even look at the bulldog bouncer guarding the door, doesn’t have to, she owns the place, it’s in her jeans, the leather boots / This is

HE
This is The Copper Hog/

The world appears when she describes it.

Welcome to the Copper Hog. Curls of cigarette smoke hang in the air like Christmas ornaments. The air rings, sounds of merriment scented with alcohol, and a whiff, here and there, of vomit. Dollar bills flutter from the ceiling, pinned by a thousand assholes hoping to thumb the scales of luck by sacrificing tip money to the gods of getting laid.

She’s not even at the bar when the first / Heya

Let me buy you a drink.

A gin, up, rocks. No tonic. Tonic means you get less gin.

Synopsis:  Every night, an untouchable woman walks into the bar, and she always, always, always leaves alone. Men fall over themselves for a shot at her, but it’s a woman from the past who drags the god back to the earth, the place where we all eat dirt.

She Gets Naked in the End requires three versatile actors. “She” (aka Elle) plays herself at various ages; Alex plays several characters and ages, including Elle’s mother. “He” plays about ten terrible men and couple good ones.

Read the play at the New Play Exchange 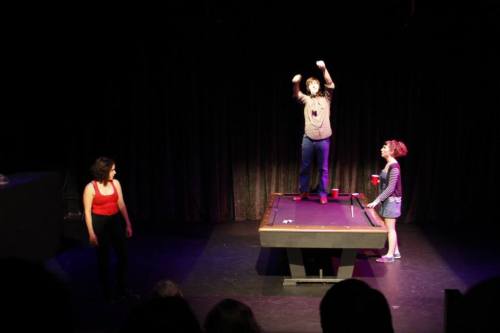 Photo by Robert Schulz
SHE (Claire Rigsby) and ALEX (Tatiana Ray) watch as HE (James Henderson) pins a dollar to the ceiling.

Photo by Robert Schulz.
All you need to produce this play is three actors, a pool table, and cue stick

5 thoughts on “She Gets Naked in the End”