Sometimes, you need the music stands. Sometimes you don’t.

New play development takes many forms. Usually, there’s a reading with music stands along the way.

And I don’t disagree with this. As a playwright, a music-stand reading is easy to produce and to understand. Things are less likely to go wrong. You’re focused on the dialogue, the characters, the moment-by-moment vision. You can hear the whole of the story at once. You don’t have to worry about the theatricality — there isn’t any expectation that what you see is the final vision of the play.

About two weeks ago, I saw a play reading that avoided music stands. While we got the visual experience of the play’s action, the actors couldn’t walk and read at the rate that they later stated that the play needed. Audience members got bored and blamed the playwright, which they voiced in the talkback, and the actors blamed themselves.

(I’ll discuss the audience talkback at a later date.)

Now, I don’t know if the actors just jumped on the hand grenade, but that’s not the point. The point is simple: sometimes you need the music stands.

But sometimes you don’t.

Figuring out which is which is a helluva thing. 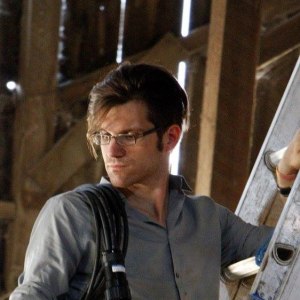 The One in the Barn: Nameless in the Desert

The first was at Barnyard Theatre.

Over a week and a half, a team of awesome Imagineers (our tech crew, led by Betsy Raymond) teched the barn, built props, collected and created costumes, and generally lent a degree of badassery to our process. Meanwhile, under the direction of Emily Henderson and Heidi Voelker, a group of actors gave body and voice to the world of Nameless in the Desert while I added to the script.

The script building process involved kinesthetic dramaturgy and improv-based activities, a devising process that sounds more revolutionary and modern than it actually is.

(In the larger history of theatre, single-author plays are less singular in their authorship than we like to think. Shakespeare wasn’t a solitary figure, scribing playthings like Emily Dickinson — he worked with a group of folks he knew.)

And the result was, essentially, the production of a play in which the actors had scripts in hand.

I’ll take a detour to say this: I was blessed with phenomenal actors who were a) game to play, b) fully committed, and c) eager for the challenge of making the best damn play they could make.

We decided that what we wanted was for the play to be on its feet — to live healthily in as complete a world that we could make in a week and half. Thanks to these people — uniformly amazing — we could make this a world.

But it’s also a kinetic play, one that lives in motion — in sword fights and hijinks and visual moments for actors. Music stands don’t cut it, and the energy from blocking things far outweighed challenges such as pacing.

The One With the Teens: Fairy Tales and Feast

In a handful of weeks, with Acme Theatre, I wrote a play (with a title I’m still negotiating). I described this earlier.

This one held a different kind of miraculous reading at its end.

These pictures are from what, for most of them, was a cold read.

Sure, we started with music stands, but as soon as the Acmeites had the invitation, they were on their feet.

Emily, who also directed this play, explained this to me: “I don’t know. I just put out the costume pieces and the props, and they just do it.”

These teens instantly created the world of the play, acting it out fully.

This one was playing a goat.

This isn’t supposed to happen. You’re not supposed to simply give teenagers a script and some costume pieces and then sit back and watch as they fully create a play. 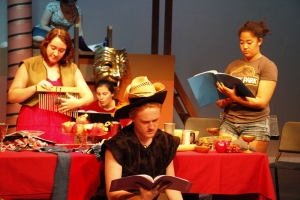 But it happened. And it blew my mind. It changed what I believe is possible for New Play Development. It made me ask, what happens when you just DO the play. Certainly, sometimes it’s a disaster, or at least not nearly as useful as the aforementioned reading demonstrated — but could that be partly because actors are trying to remember their blocking AND their motivations? And when some folks are doing a cold read, you’re focused on getting up and moving instead of remembering your blocking and the directions?

Could it be that this play just happens to lend itself to this kind of energy?

I don’t know, but I’m interested in finding out more.

The music stands were a nice touch. Decoration.