I’ve posted it before, and I post it again:

Image from the rehearsals:

And a mask in the making: 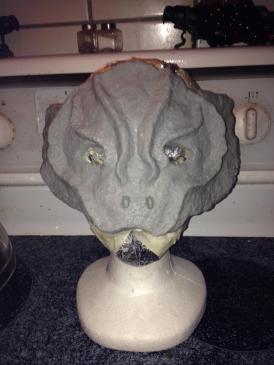 This is my first semester as the Director of Theatre Arts at Skybridge Academy. I’ve been building the theatre department. As a playwright/theatremaker, I find myself creating or making off-beat and askew classe. I teach a couple of relatively traditional acting and playwriting classes, but I’m most at home with a class called Creating Theatre, which is similar to a class on devising. The students explore non-script-based work… One recent project was for the students to ‘create an event ritual marking a transition.’ 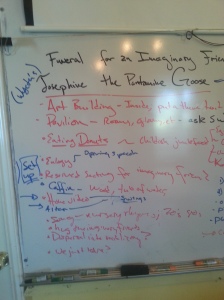 Over weeks of discussions and facilitating, the students decided to create a Funeral for an Imaginary Friend, specifically Josephine the Pantomime Goose. This included excellent speeches, a video of one of the students hanging out with Josephine, a trip to the school’s pond where they all threw imaginary ashes out into the water, and finally ended the event with a donut-based reception. A good time was had by all… except the gluten-free kids who couldn’t have the donuts, an oversight that I will not repeat.

Skybridge is an interesting animal. It’s the kind of school that has a gluten-free kitchen, and does so by necessity. We have to tell several students constantly to put on their shoes. I am also a bus/van driver for it. A student brought something to school in a box for Kombucha.

I’ll be updating with info soon about a play I’m writing with the students. We’re using some of the devising techniques and kinesthetic dramaturgy we used in creating Third Street.

Essentially, rather than building an ensemble-written play with me as director/curator, I retain the role of playwright with modified community-oriented goals. I know that sounds like a fruitcake of theatre buzzwords, so let me explain:

As I write the script, I bring in pages. The students reflect on the images this world elicits and improvise characters who could live in this world. In total, they made about 15, ranging from the strange flower-obsessed “Daisy,” to a homicidal anonymous man. From these characters, I pick a few to live inside the play. We discuss themes that are starting to emerge, and we use these themes to further explore what the structure should be. I go home and write, leaving gaps in the story for the students to fill through more improv-based activities.

The result? A play that maintains relative cohesion of aesthetic vision and a strong central narrative. Often, devised works in a horizontal process become collage, which is a different kind of beautiful, but I like writing a play with a single or dual engine driving it. Other results: students actively create a play and have ownership over this creation, learn the writing process, and reflect on how a play or story works. The long term hope: they become empowered and write their own stuff and go to new plays instead of relying on the canonized works.

Also, I really like the play that resulted from this process. It’s called Nameless in the Desert (though I may rename it if I find something better). In a beautiful and bizarre way, it feels like the play that most accurately represents where I am now now now…

Six months ago, I emerged from my second MFA program knowing that I wanted to somehow be both a writer and a teacher, that I needed these identities to fold together and become the same. I LOATHE playwrights and other writers who cannot teach but use teaching to earn their living; alternatively, I do not want to let my teaching, which has more immediate gratification, to subsume my writerly identity. So, the two must be one and the same.

This forged identity is not new, nor is it the product of the burgeoning MFA spitting playwright pupae into TheatreWorld ™. Ancient Greek playwrights were also directors of their work as well as teachers of the young pre-citizen boys in the chorus. From what I understand, the term didaskalos referred to both a teacher (hence, ‘didact’) and to director, which were poet/playwrights.  Shakespeare, of course, didn’t pen every word by himself in a lonely room – he wrote for and with an ensemble of actor / theatremakers.

I am not saying that Skybridge Academy, which actively populates the school with working artists, is consciously bottling themselves in some Grecian urn. I am saying that I’m pleased that I can be a writerteacherplaywrighttheatremakercitizen. A didaskalos.