A tough production process on this one. Our calendar wasn’t helpful to tech or rehearsals, and a bout of food poisoning benched me for a few crucial days, but the actors stepped up and made magic. 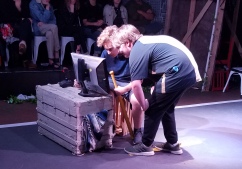 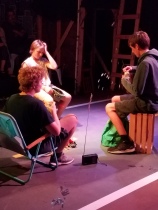 This is the hardest play I’ve written at Skybridge. It’s a big swing; I think it paid off.

Now, my theatre is micro. I can get 40-ish seats in there. I’m not trying to fill hundreds of seats; I’m trying to squeeze enough chairs to serve my audience. This means I can focus on the play itself, not on marketing. This also means that we can play with staging to integrate how we do the show with the story itself.

The play imagines the world having fallen apart on February 14, 2020. That’s less than two months away, so all cultural products are built out of the stuff of the current moment. Old Town Road and Lizzo, being primarily disseminated via digital space, are left as memories, but turn up in a memorial conducted on the anniversary of The Disappearance.

So, one benefit of this play is that we only spent about half of our budget. The apocalypse is cheap.

We start in Altierra (‘Alternative earth’), a small, pure democracy / collective in the outskirts of Austin. A fight and water crisis leads to the expulsion of a group of four. It’s these folks we follow throughout the play, as they find their way to a small fascist farm, to Sad Disneyland, to a washed out hometown and a flooded New York, while dodging traps set by Firestarters and a feral child. Eventually they make their way to New Eden, which is in Canada. This happens as one character, who has been living in a sense of hopelessness, seems about to die. He sits in the audience.

And that’s when one of the members of the audience begins to speak. This person is a surprise to my actors. I asked parents, and requested that they keep the fact that they were speaking a surprise.

This person reads a letter from the missing adults.

I wrote it on a day when I’d received a particularly painful rejection, and revised it on a day when we had some intense discussions in our community. This moment is the most present I’ve ever been in a play, it’s what I want to say, and I’m okay with that. This play isn’t the most polished one I’ve put in front of audiences, and there are some Frankenstein seams, but I am proud of this piece:

Listen my dears, young ones. You are in so much pain in a broken world. You are of age before you should be, and though we say this from a distance, we see you.

What you have taught me is this: Life is clawing past yet another disappointment, it’s scratching at the dirt, and it’s even finding joy in the scratch. It’s grabbing the hand that’s offered you, getting up, and grabbing who else fell down to bring them up too.

Yes. We, the ones who came before you, are imperfect. And we’ve passed many of our faults on to you, as you will to yours. And if aliens came to visit, they’d see creatures who… can think and know the fragility of life. Know the scarring. Know our own imperfections. And yet they’d see –

We humans, we build, we build again, and the best is when we learn from those what fell before. We stare rejection in its teeth and we say, nah. I matter. From city rubble, we hear laughter and singing and we see grass that was called weeds once upon a time break through the cracks in sidewalks through sheer force of will.

We are stubborn, us human creatures.

This is what you’ve taught me, you know. You who save each other.

So this is what I give you back: You are loved. Each and every one. Forever. Go on, my dears. Go on.